Implementing the Saskatchewan Reads program in a school or classroom often starts with establishing a physical reading space. This reading space is usually a comfortable and safe place within the classroom or school where students can just kick back and enjoy a good book.

At Vanguard Community School we wanted to add to the interior reading spaces by giving our elementary students somewhere outside where kids could comfortably read away from the elements.   With visions of the bookmobile from my youth in mind, my PAA (Practical and Applied Arts) 10 class set out to convert an old tent trailer into a mobile reading room.

We started out by stripping the old trailer down to the frame.  Next, we used our newly acquired welding skills to add reinforcements to the floor. Basic framing followed as we built a stick frame building and mounted it to the steel frame.  To keep our weight down, we framed our building using 2 x 3 studs on two-foot centres.  Also, in order to keep a low profile, we constructed a flat roof. We doubled up on finishing and structural integrity by using 1 x 4 tongue and groove spruce on the interior. Laminate flooring completed the interior.  We then wired our shack so that we could run one L.E.D. light on a switch and an electrical outlet. For our power source, we simply wired in a heavy-duty extension cord so that we could plug our trailer into an external outlet. R-12 insulation was added to the walls and ceiling.  The roof was completed with pre-cut corrugated steel.  Vinyl siding finished the exterior.

At this point, all we needed was to add a bookshelf and some books and our mobile reading room was complete.  The wheel wells served as built-in benches.  Most people who see it think it would make a great ice-fishing shack.  You can decide:

It has often been suggested that one of the fundamental differences between the United States and Canada is that the United States was born out of a revolution while Canada was created by an Act of the British Parliament.  While this is true, it is an understatement.

In fact, some of the same sentiment that led to the American Revolution also led to rebellions in Canada in 1837 and this, in turn, led us down the road towards nationhood.

You see, one of the causes (and I stress one) of the American Revolution was “taxation without representation.”  Great Britain was taxing its  13 colonies, but those colonies did not have any political power or really any say in British government at all.

After the American Revolution, Great Britain’s response to its colonies’ desire for representative democracy was to further restrict democracy in its remaining North American colonies!  Basically, they set up an oligarchy where a few appointed officials made all of the key decisions in Upper and Lower Canada while elected assemblies had very little political power.

Two separate failed rebellions (really, they were more like riots) ensued and the road to Confederation began.

As we have seen, our country was formed out of what was left over from the American Revolution. Remember, that the most coveted territory in North America was the Ohio Valley.  The United States was finally granted the Ohio Valley after Great Britain conceded it to them in 1783 at the Treaty of Paris.    So the new country of the United States of America consisted of The 13 Colonies (now states) and the Ohio Valley in 1783.

British North America was left with Quebec (Upper and Lower Canada), the Maritimes (Nova Scotia, PEI,and New Brunswick), Newfoundland and Rupert’s Land (The Northwest). This is hardly what Great Britain had wanted of its North American empire.  Imagine Canada as being the equivalent of this:

Although wouldn’t you agree that sometimes leftovers make the best of meals? 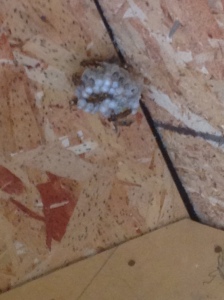 I had an alternate beginning to my shop class this year.

I thought I would start out showing the students where to get wood in the woodshed and organize a few pieces of lumber while we were in there.   After about five minutes of rattling around in the shed one of the students happened to notice a fairly small Yellow Jacket nest right above us.  There was only about 15 wasps but they were most certainly annoyed with our presence and were moments from kicking us out of “their” shed.

A quick trip to the Co-op and a can of Raid later, and we reclaimed our woodshed. No one (except the wasps) was hurt.

Just another start to a rural school principal’s year.